Before paving operations start, the paving inspector should verify that all materials that need to be incorporated in the pavement have been tested and accepted. Most materials will be stockpiled in the Contractor’s yard on the project site. Often this is also the location of the batching plant.

These items should be checked for certification, or sampled and tested when they arrive on a project.

Quality control and Quality Assurance testing for concrete will be in accordance with Special provision 12SP604(B). 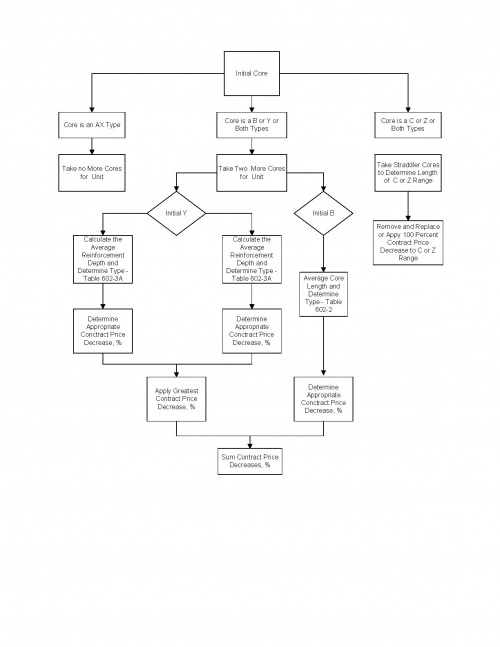 A specification to encourage the Contractor’s to construct the smoothest pavements possible and the method to measure the surface for smoothness.

The Contractors may use a California-type Profilograph or a GM-type Rapid Travel Profilometer to measure the pavement smoothness.

The Engineer will establish and mark the limits for Ride Quality Measurement including the POB, POE and any excluded areas.

The California-type Profilograph will produce a trace, or Profilogram, on graph paper, to a true 1:300 horizontal scale and true 1:1 vertical scale, which will be analyzed according to Michigan Test Method 204-88.

If a computerized Profilograph is used, a trace will not need to be analyzed, but should be spot checked with a blanking band.

The equipment must be calibrated before use.

The vertical calibration is to be done according to the manufacturer’s specification and must be documented by the Contractor.

The GM-type Profilometer will be calibrated according to the user’s manual.

Software is provided which allows the operator to test the operation of the three buttons and computer system, along with a “bounce” test.

The vertical calibration of the laser sensor is to be done according to the manufacturer’s specification and must be documented by the Contractor.

The horizontal distance is calibrated by traveling a known distance and typing in the value on the keyboard while in the calibration mode. The continued reliability of the odometer will depend on a constant tire pressure.

The measurement/profile will be taken in the wheel tracks of each lane.

Measurement outside the POB or POE may be done to check for bumps, and will be paid as Ride Quality Measurement - Concrete.

The software for the GM-type Profilometer has been designed to simulate the same starting and ending points as the California Profilograph. Starting the measurement (GO button) at the POB will start data recording at 16.25 foot (5 m) after the POB. Ending the run (STOP button) at the POE will stop the data recording 16.25 foot (5 m) prior to the POE. Caution should be taken when stopping the GM Profilometer between the POB and POE as in daily or short runs. As the recording data will stop 16.25 foot (5 m) prior pushing the Stop button, the next run will have to be started 32.5 foot (10 m) before that same point to start the data recording at the right point. See Figure 602-11 for an example of starting and stopping points.

The California Profilograph trace will have to be reduced, using a blanking band, to segments. Bumps which exceed the limits established by Special Provision can be located by using a bump template. The computer version will analyze the ride quality and locate the bumps which must be ground.

The rapid travel Profilometer can give data in inches per mile or by a ride quality index, along with the locations of must-grind areas.

Check the proposal for pay items and adjustment table for the item of Ride Quality.

Roadways, collector distributors, ramps and turn lanes that are not covered under a ride quality specification should be evaluated for smoothness and removable bumps in one of three ways:

By using a rolling straightedge available from the Construction and Technology equipment shop.

By using the rapid travel profilometer, which is programmed to check for bumps according to the Standard Specification for these areas. Contact the Construction Services section for use of this equipment.