From MediaWiki
Jump to navigation Jump to search
Email this Page

The Work Order, Form 1137, is a written order signed by the Engineer and requiring performance by the Contractor. Signed work orders have contractual status. It is used to finalize field discussions between Contractor and Engineer in which directions have been given, or agreements reached on methods, units of work, or extra work to be performed. An example of Form 1137 is shown in Figure 103-1.

The form should be completed in as much detail as necessary for clear understanding of the directions or agreement. The order should be signed by the issuing Engineer and the prime Contractor's representative indicating understanding and agreement.

An item code and item of work (description) should be assigned to all items being added to the contract during preparation of form 1137.

Work orders should be signed by the prime Contractor, but on occasion an extra copy may be prepared for a Subcontractor. Keep in mind that the prime may want to add a percentage for processing, which could cause a conflict with the price approved by the Region, Lansing and FHWA.

When required, work orders are to be followed up by a contract modification prepared and submitted to the Contractor for signature within seven days of the issuance of the work order.

Engineers are urged to bring to the attention of FHWA area Engineers, imminent changes or extras when they are visiting a particular (non-exempt) project. Often this will result in receiving approval of the FHWA representatives on the spot for the proposed work. If FHWA approval is obtained in this manner, a notation (including the name of the federal representative) to that effect should be made on copies of the work orders being transmitted to the Region office and the Lansing office. 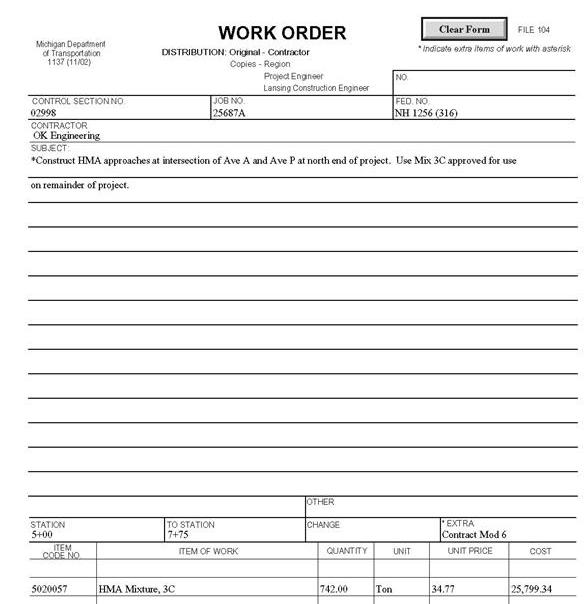