A pre-production meeting should be held before work commences on a project. During this meeting, the overall goals and expectations are set for the project. It is generally the responsibility of the Engineer to outline the scope of the project and to discuss the information provided in the contract documents. It is also the responsibility of MDOT and the Contractor to discuss any unusual aspects of the project, items that are not routine construction practices.

The role of each person on the project, for both MDOT and the Contractor, should be discussed and made clear. This requires that the supervisory personnel define the tasks, authority and responsibilities of each of the key individuals to be involved in the work. A list of MDOT personnel who will be assigned to the project should be provided to the Contractor.

The Contractor’s representative should be familiar with the project and be able to speak with authority about what is to be accomplished. A paving schedule for the project should be presented and discussed with MDOT. Any questions about the information in the contract documents should be raised and clarification requested, if necessary. A listing of key Contractor personnel who will be assigned to the project, with clear lines of authority, should be provided to MDOT.

Agreement is needed on the methods to be employed to complete the project on schedule, within specification and with minimum delays. A list of equipment that will be used on the project should be supplied to MDOT. Because continuity of the asphalt paving operation is critical to providing a quality pavement, the discussion between MDOT and the Contractor personnel should include such items as those listed below.

The discussion should include the safety of those individuals working on the project, as well as the safety of the traveling public. Clear responsibility for maintenance of all traffic control devices, such as signs, pavement markings and flagging, should also be defined.

The name of the individual responsible for safety for the Contractor should be provided to MDOT so that rapid and clear communications can be accomplished if safety problems occur. All personnel involved in the project must be required to comply with all safety standards applicable to the type of construction and asphalt paving work to be carried out.

Sampling methods and frequencies should be discussed. Test methods to be used should be reviewed to assure that individuals understand the purpose of each test, the location of the field lab and the personnel who are to conduct the tests, the time frame for the communication of the test results and the procedures to be used if failing test results are obtained. The details of the quality control program, both on the part of the Contractor and MDOT, should be discussed so that everyone is aware of who is responsible for performing the procedures and when they will be done.

Communication cannot stop once the pre-production meeting is concluded. It is important that the individuals in daily charge of the project for both MDOT and the Contractor meet periodically, both on a formal and informal basis, to discuss the progress and quality of the work done to date and the progress schedule for the future. Ideally, these meetings should occur at a regularly scheduled time and can be held on the project site, or at the asphalt plant. Asphalt paving projects, like many construction projects, are not always built as originally scheduled. Changes occur because of material supply, equipment breakdown, Contractor and Subcontractor schedules and weather conditions. When such changes do occur, it is important that they be communicated between the Contractor and MDOT and between MDOT and the Contractor.

HMA mixtures consist of a blend of asphalt binder and aggregates mixed in an asphalt plant. When specified, special additives may be required.

The old saying “Safety is Everyone’s Business” is certainly true on an HMA paving project. Communication is one of the keys to a safe work environment. Every individual should know what is expected and know how to perform the assigned tasks. Everyone, regardless of title or job function, must be aware of the need for safe work practices. Occupational Safety and Health Administration regulations must be known, understood and followed by each person involved on the project. Safety talks are a very good way to start each day for both the Contractor and MDOT personnel. Several different organizations publish short, concise safety presentations that can be completed in two to three minutes. Daily talks are one way to continuously remind people that they are working in a potentially dangerous environment at both the plant and the paving site. If an unsafe work practice is noticed, corrective action should be taken immediately, even if the paving operation has to be shut down until the unsafe practice is corrected.

The people most likely to be hurt on an asphalt paving project are those individuals who are new to this type of work. A new plant inspector can easily get burned if not aware that asphalt samples are very hot. Functioning equipment parts, high temperatures, noise and moving delivery and haul trucks all add to the possibility of an accident occurring.

The street inspector can easily get hurt if they are not aware of the number of vehicles operating on the paving site. Individuals who are working around the paver are susceptible to being hit by passing traffic and have the potential to be hurt by the equipment being used in the paving operation.

Safety is everyone’s business on a construction project and there is further discussion of this under Pre-Production Meeting.

It is very important to know what special provisions are contained in the proposal. Mixture types to be used and the sampling and testing procedures vary depending on the specifications used.

The materials used in the HMA mixtures will be shown on Form 1931 HMA Mix Design (Figure 501-1), and those materials will meet the requirements as specified in Tables 501-1, 501-2 and 904-1 of the Standard Specifications for Construction.

All mixtures specified for a project must have an approved mixture design before mix production can proceed.

The Contractor must submit a mixture design to the MDOT Construction and Technology Support Area laboratory for approval in accordance with the Procedures Manual for Submitted and Superpave Mix Design Processing.

The field application of the applied mix design is called the Job Mix Formula (JMF), (Figure 501-2). Adjustments to the JMF will not be allowed outside the mixture limits shown in Tables 501-1 and 501-2 of the Standard Specifications for Construction. 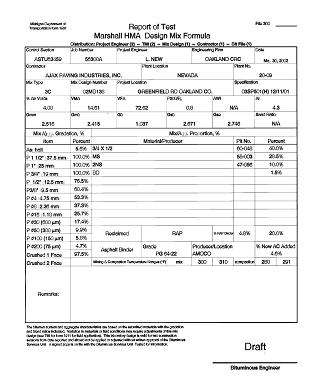 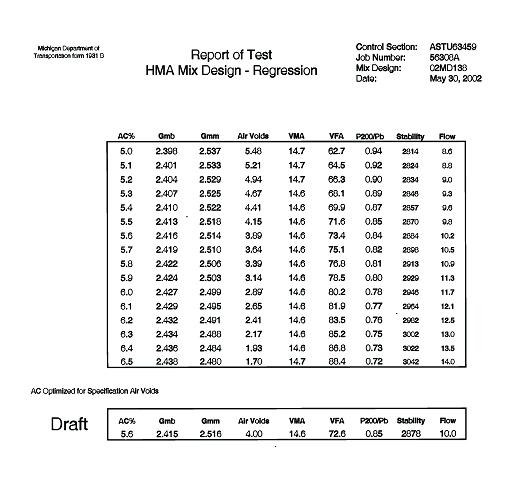 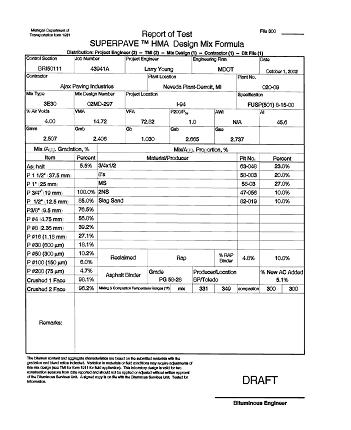 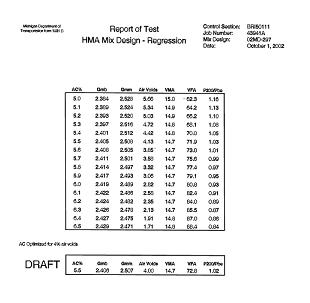 HMA mixtures being supplied to MDOT projects must be produced at a certified facility. Plants are certified in accordance with the MDOT Manual for the Certification of Hot Mix Asphalt Plants. This certification includes the approval of the field laboratory used for acceptance testing, the Contractor’s quality control plans (which should be available at the plant) and other plant operational requirements. The certification is normally completed by the Region Traveling Mixture Inspector (TMI) before the Contractor starts his first project in the spring. Certifications are good for one construction season only.

The function of the hot mix plant is to heat the aggregates, add the asphalt cement and produce a homogenous asphalt mixture. The aggregate used to make the mix can be a single aggregate, but it is generally different sizes blended together through the cold feed bins to produce proper gradation. Asphalt cement is the material that holds the aggregate together. This material can be “neat”, unmodified or modified with polymers, rubber, latex, etc. These asphalt cements may also contain anti-strip agents.

There are two basic types of asphalt mixing plants. The majority of plants used are known as drum mix plants; the other, less frequently used type, is a batch plant. The batch plant consists of the cold feed system, individual bins that hold and feed the aggregate to the drum dryer (Figure 501 3). This dryer heats the aggregate to the desired temperature and delivers the material to the hot bins in the tower unit. Aggregate is generally sized by means of a screen deck into two to four of these hot bins. The aggregates are then proportioned by weight into the mixer, also called the pug mill. After a short mixing process, the asphalt cement is added and the entire mixture is mixed for 30 to 45 seconds. The mix is then dumped into a truck, or transferred to a hot storage silo to be loaded into a truck later.

Drum mixers come in many different types, such as parallel flow, counter flow, double barrel, drum-within-a-drum and drums with separate mixing chambers (Figure 501-4). Most drum mixer plants heat the aggregate, add the asphalt cement and recycled asphalt pavement (RAP), if used, and mix all the ingredients in the same drum. The other type adds the asphalt cement and RAP in a separate mixing chamber out of direct contact with the burner flame. No matter what type of plant is being used, several key items should be monitored.

The MDOT plant inspector should follow the sampling and testing procedures explained in the Special Provision for Furnishing and Placing HMA in the project proposal. It can also be provided by the TMI.

The inspector will witness the Contractor taking the daily asphalt binder sample and submit to the Construction and Technology Support Area laboratory for binder certification verification testing.

While the acceptance testing is being conducted, it is a good idea to keep the Contractor’s personnel informed of test results, whether passing or failing. It is also very important for the MDOT inspector to be aware of the Contractor’s sampling and testing procedures and their test results. Many problems can be avoided if the two technicians keep each other informed and observe each other’s procedures.

The MDOT inspector should perform the mixture acceptance testing so the Contractor knows the results within a reasonable time after the completion of the lot. The testing of cores should be completed within two days of taking possession of the cores.

The Contractor will be paid for conducting quality assurance testing. Included in the payment are: the equipment and personnel needed to perform the required sampling and quality control testing, including the coring operation; a fully equipped field laboratory for the MDOT inspector to perform the required quality assurance testing. All daily and project documentation are also included in this item. Final payments should not be made until all project documentation has been received.

Payment is based upon total tons placed at the project site.

Price adjustments are applied only to the bid price for the HMA mixture discussed in subsection 502 of this manual. No adjustments are made to the quality assurance testing bid item.

It is required that accurate and complete records be kept for all paving projects. This is true for both the Project Engineer and his staff and for the Contractor’s general superintendent, plant and paving superintendents and all foremen. Trying to reconstruct events at a later time without written notes and complete test data is usually frustrating and often results in conflicting opinions as to exactly what happened. One procedure should constantly be followed: if in doubt about whether the information is important or beneficial, write it down. The results of all daily and periodic tests conducted at the asphalt plant must be recorded on the appropriate MDOT form.

Information on what occurred on the paving operation must be recorded on the inspector’s daily report and should include:

This will allow for a better understanding later if deficiencies develop in the performance of the final product. This information must be detailed and complete. If a conversation is held with other project personnel concerning project activity, the date and location of the conversation should be recorded. The names and titles of any people involved in the discussion should be written down, as well as the topics discussed. The outcome of each conversation must be recorded; who told whom to do what, and what was the reply?